"The Dawning of Change" - Again

WOW! Here we are, the country has completed a transfer of power. The ceremonies and celebrations marked the occasion of the President Obama's Inauguration into his second term. The people have spoken. The constitution has worked again. We are a fortunate as a nation.

My household followed the happenings throughout the day. (Why? That's another blog.)  Change is one of those few things in life that is a constant. Many countries across the globe do not deal with governmental change as smoothly as the United States.

Speaking of change, I saw the Broadway touring company of HAIR this weekend. Now, my children asked, "Why did dad and you decide to see Hairspray?" You see all of them were born after the first Broadway run of Hair (1968).  I had to explain to them that HAIR shook the foundation of all that was "American" when it debuted. It had the first multi-racial cast that interacted with one another, leading roles, and romantic interactions. It had sexual dialogue, anti-war speeches,what then was consider open desecration of the draft cards and the American Flag*, profane language, and frontal nudity on stage. It was about the "hippie" generation who was "anti-establishment and anti-war." It defied the cultural norms. It was the first play to have the "all-in" feature, that is, the cast went into the audience and invited the audience to participate with the cast.  It began pushing the norms as we knew them.

It was probably the most shocking thing since women wanted the vote, an education, shorter skirts, bobbed hair, to wear slacks, put on make-up, or to procure birth control. The establishment was upset because it challenged the existing protocols and cultural morales. It was the wildest musical that was ever produced on Broadway. Yet, it was interesting to listen to the generations discussing the play at intermission.

"What's the big deal with this play?"  asked this something thirty women to her mom in her sixties.

"You need to review the times and attitudes that were in place when this show initially premiered," her mom answered, the emotion and memory of another time still in her voice.

"I've seen and hear worse on the movie screen and cable television." replied the daughter.

"You see, read, hear, and do what you are able to do today, because of this play," the woman shot back. "It was because of brave writers, producers, and directors more than forty years ago who pushed the envelope. They and others like them opened the eyes of the public to what was really happening in the schools, Viet Nam, between their teenagers, and behind the closed doors of a few powerful people. It was through literature, music, and the arts that change was propelled." 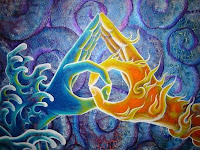 Change is being propelled again. Listen, watch, and be prepared to be a participant. An election is only a beginning. The Inauguration is the catalyst.  We the people are the movers and the shakers. Take your place in history. Know your state and federal legislatures, place them on speed dial on your phone, Twitter and Facebook accounts.  "It is the dawning of the Age of Aquarius" once again.


*What was considered desecration of the American flag was later defined as a First Amendment - Freedom of Speech.
2013 Ignauration cultural change Hair the musical