Showing posts from September, 2015
Show all

Be Fearless: Computer Sick-Revert to Other Technology

When a writer's computer is out of commission, (mine left me for three days) you find yourself using another technological tool.  My phone became my life line, "Galaxy" the android version of "Siri," understood me clearly by the end of the first day. This app was never on my radar until my computer became ill. Urgent Facebook replies to family and friends accomplished with my phone's voice activated feature. The absence of my trusty computer lead to many an "ah-ha!" moment on my phone. "Galaxy" became my new 'modus operandi' for returning text messages. My office took on the appearance of being organized. The family calendars coordinated with my phone. I even took on my husband's iPad to do some critical financial checking. Yes, my handheld device provides multi-purposes, but it does not give me the creative tactile feeling of my fingers on a keyboard responding to the impulses of my brain to form letters to words, word
Post a Comment
Read more

September: Be Fearless-Ask a Writer About e-Publishing 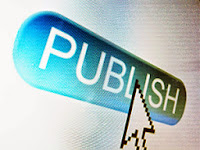 These last few weeks have taught me a few lessons about myself and my writing processes. Let's examine the question: "How will I publish my book?" I lost count of the number of revisions Changing Habits morphed from its conception two years ago. After multiple beta readers, critique group examinations, selected readers to critique it, I felt ready to publish,  but fear held me in its grip until I remembered my theme this year is "Be Fearless." I knew I wanted to e-publish. Taking my mantra to heart, I started studying the various avenues and choices of e-publishing. My notebook was filled with questions. The vendor choices are prolific. I wanted hard copies for friends and family members who don't read online. Can I set up a"print on demand" system? Do I have to commit to a large run?  How many times have I listened to individuals who told the tale of spending thousands of dollars to print their book only to still have cases of copies still
Post a Comment
Read more
More posts